Last week, I got the chance to attend IK at Guenne in Northern Germany. The whole week was packed with inspirational lecture series and thought-provoking conversations. I got to meet many scientists and students coming from different backgrounds that were interested in the intersection of brain sciences, life sciences, and artificial intelligence. I would totally love to go back to IK again next year if I get the chance.

So you might be wondering what IK is. IK (Interdisciplinary College) as its name implies is a spring school that started 30 years ago which aims to promote the education and awareness of artificial intelligence from the perspectives of different disciplines. Participants around the world gather at the beautiful Heinrich-Luebke-Haus for a week, learn about the cutting-edge research, and discuss their understandings on the raised issues. This year IK keeps up its multidisciplinary nature by having talks from deep reinforcement learning to biological spiking neural networks, and from music theory at the cognitive level to the connections between Artificial Intelligence and sci-fi movies. What I appreciate more were the intensive discussions that I had with the scientists and my peers. I’ve never encountered a group of people that are so open about ideas and willingly share their thoughts with others. I felt overwhelmingly welcomed already even on the train to Soest where I met another IK participant. The discussions just kept coming. Although the participants were mostly German, I almost always felt not being left out in any talks I had as people would either only speak in English or switch to English when they noticed my poor German skills.

I first knew about IK a year ago in the machine learning reading group with professor Herbert Jaeger, but it didn’t catch my eyes that much because IK was held during school time. If I wanted to attend, I would have to miss a whole week of school. It wasn’t until HPI Berlin Hackathon which occured in the summer of 2016, that I decided I would attend IK 2017. At the Hackathon I met Marvin Fey who I teamed up with for a Wiki-Data data analytics project. He told me his thoughts about intelligence which mainly came from Jeff Hawkins’ book On Intelligence and was telling me his fascinations of wanting to understand more about intelligence in general. I was simply stunned by his hours-long talk and was curious about how he found out his interests. Then he told me IK was the evolutional event for him. Immediately I figured: IK was the black swarm, the rare but impactful event that often changes people’s life trajectory. Because of this encounter, I made up my mind to become part of IK 2017 and while I am writing this blog post, I still think coming to IK was one of best decisions that I’ve made.

Throughout the whole week, the days were packed with different lecture series and the nights were packed with some evening lectures and fun activities for social networking. I would say I had pretty good life-work balance, having roughly eight hours of lectures, eight hours of sleep and the rest for networking and discussions. There was this Epistemology (theory of knowledge and understanding) lecture given by Gerhard Roth from Uni Bremen. I would never have thought about the world from his viewpoint if I didn’t attend IK. In essence, he argues that because:

and therefore the brain cannot prove the “truth” of its own construct. This theory might sound insane from the first glance, but if one takes a closer look, the virtue will disclose itself. As humans, we are limited by our sensory inputs, our eyes can only observe lights within certain frequency band and so do our ears to sounds. We never see the world in its complete form and how do we really know the world we perceive is the real one? The answer is we don’t know, period. I am not sure if I am taking the view too far, but if we interpolate epistemology more, we can even say the sciences that are considered true, are only coherent with the world that we perceive. If coherence is reached among many people, then we will conclude that this scientific fact is true but in fact no one knows the real truth. I am not to judge the validity of epistemology but to give you a taste of what IK lets me ponder greatly. There are many other fascinating lectures such as understanding the evolution of society via network theory and robots like me by Ipke Wachsmuth who presented himself as a robot and opened up intense discussions on the ethics of robots in this fast-growing society. This list can go on and on, but I guess you already have an idea of what the lectures are like.

As inspiring as the lectures might be, I still think listening itself is only a passive process. It’s hard to convert everything you hear into the language of your own. That’s why I like to facilitate my learning process using more active means i.e. talking to others and writing. During last week, I felt like I was always caught in some kind of discussions. The fun part was random people would simply join if they overheard the conversation and thought it was interesting. I want to share two messages that I learned over those discussions, and I hope you will like them too:

IK seemed to have empowered me with the curiosity about every aspect of sciences and life. I know many participants who I’ve talked to have the same feeling. Life simply rejuvenates. It is intellectually stimulating to be surrounded by computer scientists, cognitive scientists, neuroscientists and other scholars all at once. I am glad that I came to IK to get to know those amazing people at a personal level. I do hope I get to meet them again in the future to talk about their progress on research. Moreover, my IK experience was especially enriched by Marvin Fey. He seems to be a mentor and a good friend at the same time, guiding me through all the traditions the IK has and inspires me with his constant thought flow. We had lots of fun together. He also writes about life and brain sciences on his blog. He likes to explain abstract concepts in simple terms with precision and conciseness. If you happen to like my writing, you will enjoy his too : ) 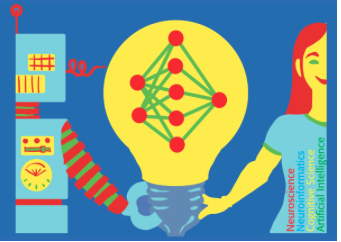 An AI researcher in training and an entrepreneur at heart.